First, I’m not going to apologize about not writing much on this blog.

Like many things, it’s easy to have a fine start and then let things slide as time goes by.  I began doing regular writing here in the Spring of 2015.  Lots of my thoughts have morphed and changed since then, as one might hope, and perhaps I’ll revisit some things over time.

Tonight I wanted to talk about worry.

Don’t get me wrong: it’s absolutely human to worry sometimes, especially if there’s something to worry about.  If you get a bad health diagnosis or your grandmother is dying or your cat is sick, it’s normal to be worried.

But that’s not what I’m talking about.

I’m more talking about the idea of chronic worry.

I’m a worrier (and I say that only as part of my truth-telling in this piece–I’ll offer a affirmation treatment toward the end).

I used to worry about my health all the time.

I’ve always been aware of subtle shifts in my body and I used to employ that to worry about coming down with this or that.  I used to talk myself into more than a few stomach viruses except that I would never actually get sick.   When I had what appeared to be a real health scare several years ago, I learned so much about how I react and how I can create a certain reality in my head and live accordingly and then that reality turn out to be false, though I lived it as though it were real.

Chronic worry, after all, is claiming that the condition you’re worrying about is already present in your life.  You get to experience all the emotions around it.  Note that that’s exactly how folks like Neville Goddard and Emmet Fox and Wayne Dyer tell us how manifest the things we want in our lives.    We are to create it in our minds and feel it as though it’s already present in our lives.  That’s wise use of the power–worry is non-constructive use of the same energy force.

Always remember that your imagination is your primary creative force.  You’ve heard people say “if you can dream it, you can be it.”  The same holds true in reverse.   If you create a nightmare of a situation in your mind, you can experience that nightmare in your life in such a way that it feels every inch of real.

And if you do it long enough, you’ll bring it right into your experience.

So far as stomach viruses go, every time I’ve had one, it’s just kind of come upon me without any warning, so I finally realized that all this worry about getting sick was nothing short of futile.

I’ve had lots of changes in the past year.

I left a well-paying university job to become a real estate agent, along continuing with my metaphysical work, my photography and my piano playing.  I was no longer thriving at the university, and I wanted time to pursue my other loves.

It’s been a real lesson in faith for me.

I’ve done very well for a first-year realtor but in many ways I could have had more peace if I hadn’t stressed and obsessed over when, what and how the next deal was going to be.

Generally speaking I’ve kept a positive framework going throughout the experience.  But when I’m not in such great head-space, I’ll project my worry problem right onto my new career and then things will begin to slow down for me.  But when I shift my attitude just a bit, things start to flow.

All these things I’ve been studying about the so-called Law of Attraction, etc are actually borne out in three dimensional reality.  It’s one thing to know this because you’ve studied it–quite another to experience it so directly in your day to day affairs.

At any rate, most of what I wanted to get across can be summed up in the picture above  that I wrote on the white board on a night I was doing student conferences (I’m still professoring part-time).  “If you’re a chronic worrier, most of the things you worry about are not the problem.  Those are just things upon which you project your worry problem.”

My students thought I wrote it on the board for them to ponder–and I could tell who the chronic worriers were.  Quite a few of them had never thought of it that way.  Mostly, I put it up there for my own benefit.  Sometimes, we need reminders of the things we think we know.

We know them, often, in the head…but the heart, being more experiential, takes a bit longer to convince.

So, I will leave you with this little affirmation treatment.

“By claiming peace for myself, I release my mind from the need for chronic worry.  I experience peace in the only time which exists–this moment.” 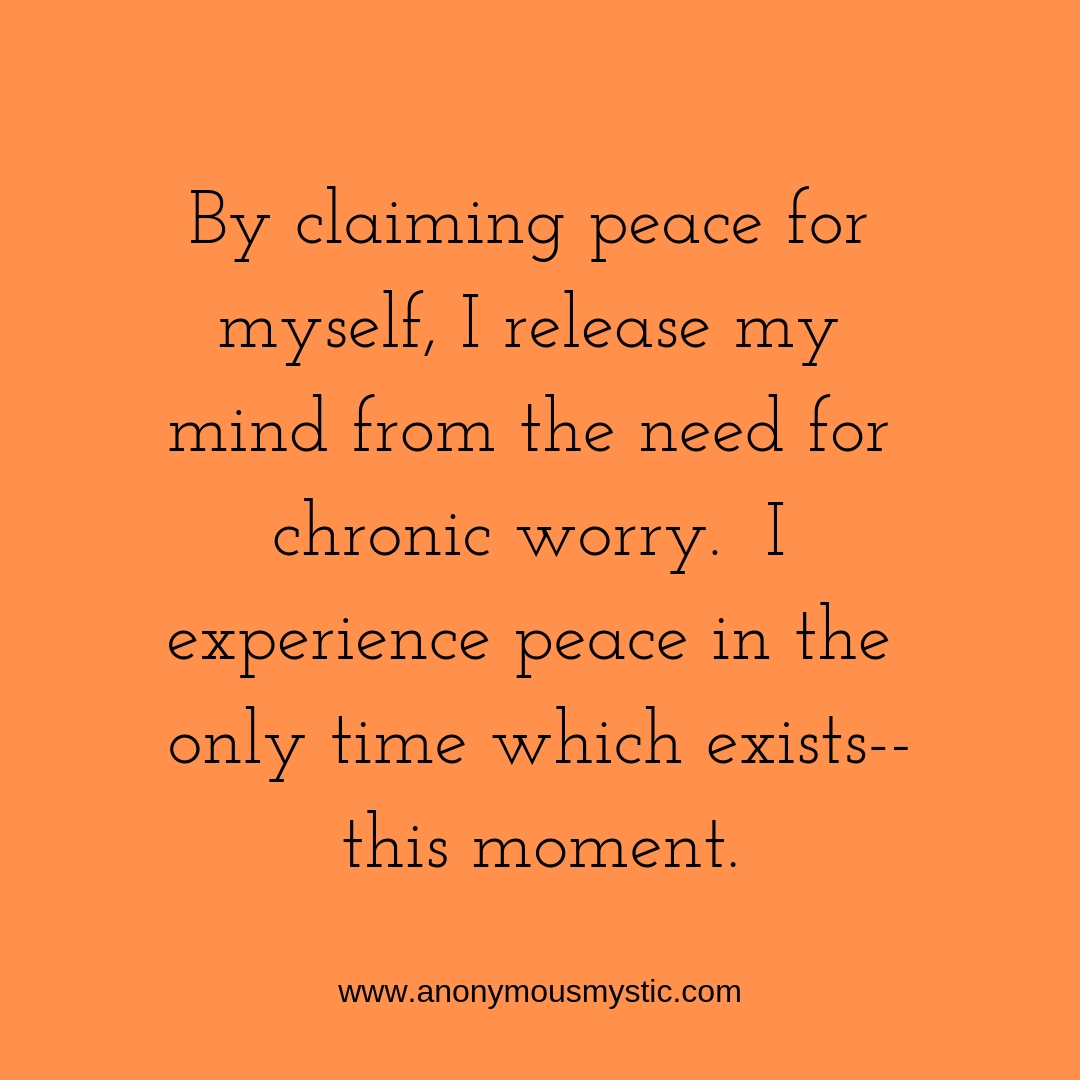 Peace and love to all.

View all posts by anonymousmystic